Skip to content
We may earn an affiliate commission when you buy through links on our site.
SaleBestseller No. 1

I was recently browsing through a lot of online retail stores, looking for a stylish yet sporty set of smartwatches to gift my wife and kids this holiday season.

However, not many were able to catch my fancy and even lesser supported features that catered to my needs.

And it was not until my surfing reached Nixon watches that I was able to find a timepiece brand that sold exactly what I was looking for.

Nixon watches are all about enjoying a smart way of life in a very sporty fashion.

Their watches are made explicitly for those who love to surf and snowboard, but that doesn’t mean that they are incapable of formal wear. A lot of their models are just perfect for professional environments as well.

From keeping a count of your steps to measuring your wave height, a Nixon watch is capable of a lot more than just keeping time. And today let me tell you about my experiences with them.

Nixon began as a watch company whose very goal and design came from the desire to create a watch series that perfectly reflects the lifestyle of the Californian youth in the late 90s.

Founded by Andy Laats and Chad DiNenna in 1997, Nixon watches began their career by raising $1 million in venture capital and creating a watch catalog the very year they started. They initially began 7 watch models released through just 200 retailers, but in almost 9 years they grew to possess 90 different models and over 60 employees.

Soon they grew large enough to open a subsidiary in France, and by 2006 they were bought by a brand called Billabong International.

But in 2012, only after a short 6 years of being a Billabong brand, Nixon became an independent watch manufacturer once more. They left with equal 48.5% ownership stakes in the possession of Billabong and Trilantic Capital Partners, while Laats and DiNenna still owned the remaining 3% of the company.

If you are familiar with or are fond of the Fossil family of watches, then you are absolutely going to adore the Nixon timepieces. They are a lot similar in quality to the Fossils group but cater more to the sporty youth than supporting a more traditional design.

The Nixon line-up has both digital and analog timepieces, with some of the lower-end models supporting Japanese movements.

And though looking at their price tag you might feel that they are rather expensive for a quartz movement watch, let me just assure you that they are one of the more reliable value for money watch manufacturers out there. 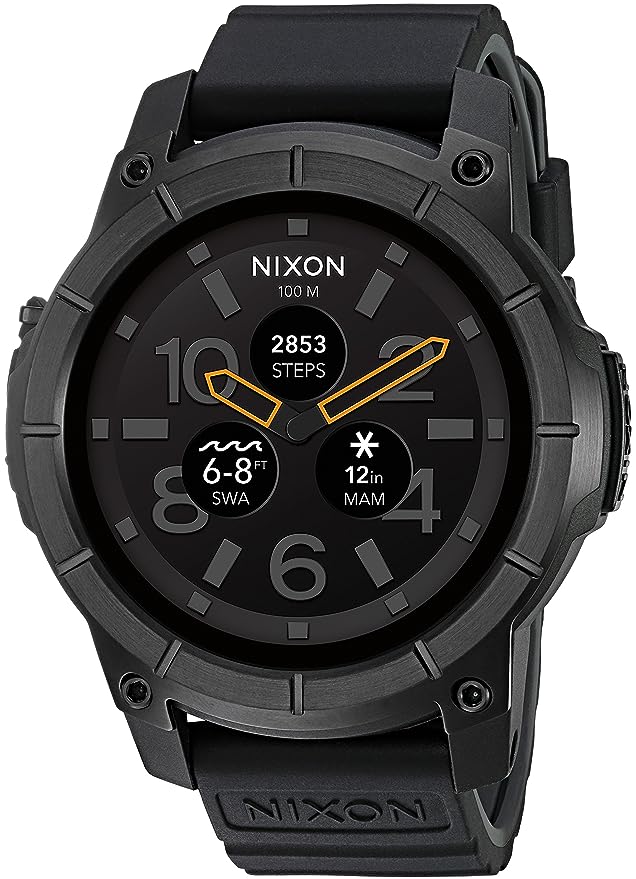 If I were to choose a model from their vast and diverse collection, then I would without a moment’s hesitation go for the Nixon Mission. It’s the watch that I got my wife Amy, and I wouldn’t be exaggerating if I said that she absolutely adores it and practically wears it everywhere she goes.

The Nixon Mission is a high-end runner’s watch which is as strong and durable as it’s massive. It’s an Android watch that supports features specifically designed for surfing, waterboarding, and other water sports.

Amy spends a lot of time participating in extreme water sports as a hobby, with water polo being her all-time favorite. And the Mission is by far the most water resistant smartwatches I have ever come across.

Where a standard watch manufacturer would advise their customers to not deliberately dip their models into the water, Nixon does the exact opposite. This watch is certified to be entirely waterproof till 10 ATMs underwater or 100 meters in depth.

And this is all thanks to its industrial grade build. The Mission comes with tough polycarbonate plastic coatings on its sides which keeps the watch absolutely airtight even under extreme conditions.

It has a bezel and case that are made out of tough 316L stainless steel, and the bezel is uniquely raised above the Gorilla Glass that covers the display.

The Nixon is a very big watch as well; it’s literally huge in all intents and purposes. And this chunky design comes in a lot of colorful versions which support Cerakote. Cerakote is a ceramic coating which is quite hard, along with being water and corrosion proof. It’s also the material used in guns.

Though its massive size provides a better display and improved sports tracking and application notifications, it can be quite inconvenient from time to time as well. Its trendy and flashy look is what makes Amy wear it everywhere she goes, but not while she is working.

As she has more of a desk work oriented job, it is an absolute hindrance for her to maneuver around the keyboard while she has it on. So, she always opens it when she works.

But even for its size, the Mission sits rather comfortably on the wrists. Its mixed polycarbonate and steel build makes it extremely lightweight and much more convenient to carry around than those bulky traditional timepieces that hog today’s market.

Where can Nixon look to improve their models?

One major grievance that customers have towards Nixon is that most of their models, especially the premium ones are designed for left-handed wearers.

This means that although the watch crown which is on the left might help avoid leaving painful scarring on the wrist for the bulkier models, it’s just an inconvenience for the smaller designs.

Additionally, the linked designs of their straps are meant to fit standard wrists ideally. So, a person with larger wrists might have a problem wearing these watches. And he/she may have to custom make their own wrist straps from the local store, which can be quite an inconvenience.

If you are in the market searching for affordable and trendy sports watches, then the Nixon range is perhaps precisely what you’re looking for. From durability to amazing sport tracking features and GPS, their models have it all.